This from a National Geographic report dated November 24th, 2004 by James Owen

No wonder homing pigeons seldom get lost: They may get directions from their beaks. This intriguing idea is raised by a new study on the navigational abilities of birds published in tomorrow’s issue of the science journal Nature.  The study raises the possibility that homing pigeons use a magnetic “map” inside their beaks for long-distance journeys. Researchers say their study proves for the first time that homing pigeons can sense Earth’s magnetic field.

The findings add to the debate over whether pigeons and other birds chart their flight paths by using a magnetic sense or by following scent clues in the atmosphere. “The question of how [pigeons] might find their way home has fascinated laymen and academics for several decades,” said Cordula Mora, a biologist at the University of North Carolina at Chapel Hill. 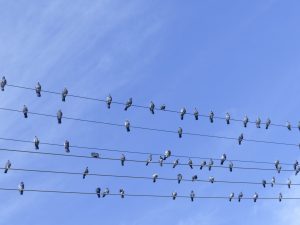 Descended from wild rock doves, homing pigeons can locate their lofts, or roosts, even when released several thousand miles away. Because of this ability, people have used the birds to carry messages since the days of ancient Egypt. “We know that pigeons have a magnetic ‘compass’ and a sun compass. But there has been a long debate over the nature of the ‘map’ that pigeons use in conjunction with these compasses,” said Mora, the lead author of the study. “The two main theories are that pigeons smell their way home using an olfactory map, or that they have a magnetic map.” Seeking to test the magnetic-map theory, Mora and her colleagues placed the birds in a wooden tunnel outfitted with feeding platforms at opposite ends and magnetic coils on the exterior. The researchers then trained the pigeons to fly to one feeder if the magnetic field inside the tunnel was undisturbed and to the second feeder if the coils were switched on.

The researchers found that the birds’ ability to select the correct feeder was significantly impaired if the birds had small magnets attached to their beaks. The scientists suggest this is because magnetite, an iron-rich crystal with magnetic properties, is found inside the homing pigeons’ beaks. “We can now say that the pigeon’s magnetic sense is located in the nasal region and is most likely magnetite-based,” Mora said.

Martin Wikelski, a professor of ecology and evolutionary biology at New Jersey’s Princeton University, who was not involved with the study, said it “reveals very interesting data on the capacity of homing pigeons to detect magnetic anomalies in a cage. As such, it is a significant step forward in our understanding of magneto-reception in pigeons.” Mora, the study author, said migrating birds are guided by the sun, moon, stars, and other visual clues, such as memorized landmarks. But she noted that Earth’s magnetic field also provides birds spatial information that is ideal for accurate navigation. “The Earth’s magnetic field is very stable on a geological timescale,” Mora explained. “The Earth’s field is also highly predictable on a spatial scale, with intensity being weakest at the Equator and gradually increasing with latitude toward each Pole.”

Other animals are also thought to navigate using magnetite. Scientists believe the mineral may explain the strong directional sense found in aquatic migrants such as whales, sharks, tuna, trout, and sea turtles. Studies indicate that even marine mollusks have a magnetic compass sense.

While birds have long been known to have a magnetic compass, some researchers suspect birds use this in conjunction with the type of magnetic map mentioned in the study. Mora noted: “Other recent research indicates that some migratory birds may have a magnetic compass based on photopigments in the eye. If this is found to be true also in pigeons, then it may be the case that the compass is in the eye and the map is in the nose.”

So do animals such as homing pigeons use the Earth’s magnetic field as a map as well as a compass?

“Until now nobody had been able to demonstrate behaviorally in the lab that pigeons can detect magnetic field stimuli that mainly consist of changes in magnetic field intensity, and thus could form the basis of a magnetic map,” Mora said.

She noted that proponents of the idea that birds chart flight routes principally by smell have used previous inconclusive experiments to back up the “scent map” theory. Birds are generally considered to have a poorly developed sense of smell. But seabirds such as albatrosses and petrels, which have large, tubular nostrils, are known to use scent clues to locate nesting sites and prey out at sea.

“It is not clear what the hierarchy of cues is the birds use in the wild,” said Wikelski, the Princeton ecologist and evolutionary biologist. “They could still use olfaction first and foremost, not that I favor one hypothesis over the other. But the current experiments simply cannot distinguish between them.”

Now that scientists know that homing pigeons’ magnetic-map sense is located in their beaks, Mora says new studies are needed to find out for certain whether birds really can plot a homeward course by following their noses.