This from a National Geographic report dated December 6th, 2006 by Scott Norris

Some bats find their way home using an internal “compass” that senses Earth’s magnetic field—similar to those believed to be used by migrating birds—researchers say.  Princeton University biologist Richard Holland in New Jersey and colleagues found that exposure to artificial magnetic fields confused such bats, causing them to fly in the wrong direction. 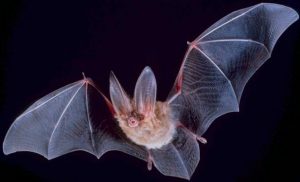 The finding, reported in (following day) an issue of the journal Nature, is the first of its kind in bats and helps fill in a gap in scientists’ understanding of how the animals navigate. (Related photo: Bat Has Longest Tongue of Any Mammal [December 6, 2006].) Night-flying bats are famous for their use of echolocation—bouncing sound waves off objects at fairly close range. Echolocation helps bats locate insect prey and steer around objects such as trees and buildings.

The new study suggests that a magnetic sense may help bats navigate over longer distances, such as when returning to nightly roost sites. Holland theorizes that the bats, like some birds, also use sunset as a directional marker. This may let the animals fine-tune their internal compasses and adjust for the difference between magnetic and true north.

“It is interesting that our bats, which usually fly only a few miles, appear to use the same mechanism as migratory birds that fly thousands of miles,” Holland said.

As the World Turns

Holland’s group fitted big brown bats with lightweight radio transmitters and released them from a location 12 miles (20 kilometers) north of their home roost. The animals’ flight paths were tracked from a small plane flying overhead. Bats that received no artificial magnetic exposure took off southward, easily finding their way home. Prior to being released, two other groups of bats were exposed to magnetic fields rotated 90 degrees clockwise or counterclockwise from Earth’s magnetic north. The bats were able to observe the setting sun. Upon release these bats appeared to fly south using “flight rules” based on the direction of magnetic attraction at sunset.

Bats in the group exposed to the clockwise magnetic fields flew east, for example, while those in the opposite group flew west. But some of the errant bats eventually realized their mistake and made it home that night, suggesting either a recalibration of the compass or use of other navigational cues, Holland says.

A Sense of Where You Are

A magnetic sense has been described in a wide array of animals, not just ones that fly. Lobsters have it. So do salamanders. (Related: “Rat Radar: Rodent Uses Natural ‘GPS'”[January 29, 2004].)

“It’s not just associated with long-distance movements or migration,” said John Phillips, a biologist at Virginia Tech university in Blacksburg. “We find even short-distance movements by simple animals are patterned by use of directional compass cues.”

Scientists know of two kinds of magnetic orientation. In one, a simple compass sense is based on particles of a mineral found in many organisms known as magnetite.

This more sophisticated sensory apparatus provides an internal “map sense” of where the birds are on the globe.

“We don’t know if bats have a light-dependent compass,” Holland said. “But they do have magnetite in their bodies.”